Chinese New Year – Children (across all sites) can come to school wearing something red.

School (all sites) close for half term (1 week and 2 days)   Children return on Wednesday 1st March.

STAFF INSET DAYS.  School (all sites) is closed to children on both days for staff training.  Children return to school on Wednesday 1st March. 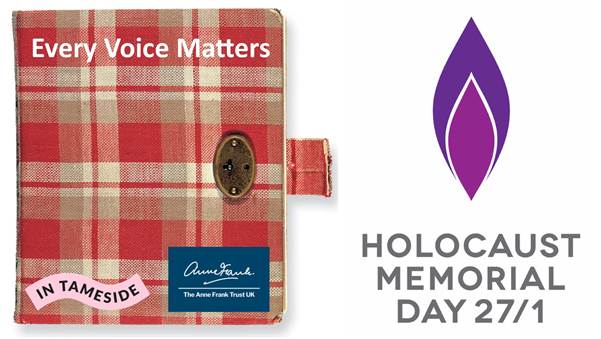 “Every Voice Matters” is a unique and powerful art installation designed to promote the message that tolerance and acceptance of others is important for everyone.

Created by all 6 of Tameside’s special schools in collaboration with the Lakes Care Centre, Dukinfield, with support from Tameside Cultural Services arts and events team, it commemorates the Holocaust (1933-45) when millions were killed because of their perceived racial or biological inferiority. The piece will be unveiled on Holocaust Memorial Day.

The installation brings the children’s creative thoughts on the Holocaust to life, in the form of a mannequin of Anne Frank made with extracts from her famous diaries.

Anne an ordinary Jewish teenager, did extraordinary things during the Second World War. Her diaries movingly chronicle her family’s years in hiding in Amsterdam as they unsuccessfully tried to avoid banishment to a death camp.

Those sheltering the Franks and others did so knowing they would die if betrayed to the authorities. The mannequin Anne holds an album bearing their pictures and symbolises what made Anne so special.

Through their work on the installation the children will have seen how, even in times when so many were forced to live under Nazi occupation, there were still good people prepared to risk everything to help those in need.

Creating the installation the children asked questions like, what made Anne do extraordinary things? Do her possessions give any clues? They also took part in activities focusing on “Superhero Self!” looking at what qualities, like kindness, make the participating pupils who they are and how they can be the best they can be.

By highlighting Anne’s story, and the Holocaust as a whole, the project set out to help the children understand why people should always accept others and be on guard so that such events are never forgotten or repeated.

Each school embraced a different approach to the installation. While one considered the atrocities of the Holocaust, and established a creative response, another looked at tolerance and the fact it is okay to be different.

In a first for a Tameside Special Educational Needs Arts Hub Holocaust memorial creation, the spoken word was used as an artform thanks to the brilliant support of artist Dommy B, and Jonathan McKee from the Anne Frank Trust who helped to deepen understanding so the children were able to vocalise their creative thoughts.

Everyone involved also took part in Arts Award Discover, a nationally recognised qualification run by Trinity College, London. Their diaries and sketchbooks – which include some of the ordinary people the pupils consider to be heroes – form part of the installation, scattered about Anne’s feet.

The exhibition is set to be unveiled on Friday 27 January at Thomas Ashton School so that friends and family will be able to take view the installation, it will then tour each of the participating schools, remaining at each for a week at a time over the following 6 weeks.

You can find out more and listen to the spoken words produced by the schools by using the QR codes below.

The installation will then return to Thomas Ashton School as its permanent home.